The NT Government commissioned the University of New South Wales (UNSW) to conduct a study of inner city heat, humidity and wind movement. The study used thermal imaging and drone monitoring to map the city’s temperatures.

The initial report identified hot spots in the city, developing and evaluating heat mitigation scenarios and proposing solutions for the city of Darwin. Following the study, a number of greening and cooling initiatives will be trialled as part of the program to revitalise the Darwin CBD. 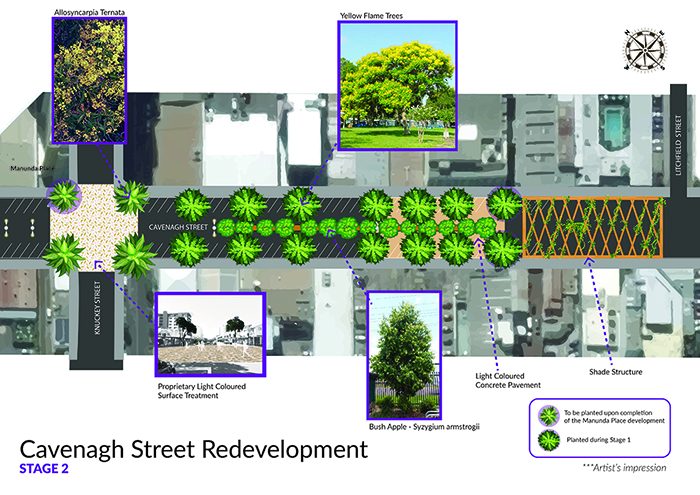 Cavenagh Street is a testing ground for heat mitigation strategies for Darwin, between Bennett Street and Knuckey Street.

This location was selected following the heat study which showed Cavenagh Street to be one of the hottest locations in the CBD, with surface temperatures exceeding 60 degrees in some locations.

Pending the success and what is learnt from the trial, there is the potential for mitigation methods to be used in other locations. This work could position the Northern Territory as a global leader in heat mitigation projects and research.

Heat mitigation initiatives along Cavenagh Street have been constructed in five zones, with each location trialling different options.

For more information, visit the Department of Infrastructure, Planning and Logistics website.

The heat study showed that the surface carparks around the State Square area act as heat sinks, generating high temperatures that the wind blows through the city centre. A new underground carpark is being constructed next to Parliament House which will allow existing asphalt carparks in the area to be greened.

The urban heat island (UHI) effect in which urban areas exhibit higher temperatures than the surrounding rural or suburban areas is well documented in hundreds of cities around the world including major cities in Australia.

The Government commissioned the University of New South Wales (UNSW) to conduct a study of inner city heat, humidity and wind movement. The study used thermal imaging and drone monitoring to map the city’s temperatures.

The initial report summarises the UNSW investigation of the characteristics of the urban heat island of Darwin, NT, identifying hot spots in the city, developing and evaluating appropriate UHI mitigation scenarios and proposing optimum UHI mitigation solutions that could be tailored for the city of Darwin.

Some of the recommendations to achieve a cooler inner city include greening and shading and new-generation paint and paving products. Further mapping of temperature over a twelve month period will be undertaken to continue to build a consolidated picture of temperature, hotspots and mitigation technologies.

A presentation of recent research into the effects of heat and climate took place in Darwin on 22 September 2017. Copies of the presentations can be accessed below: